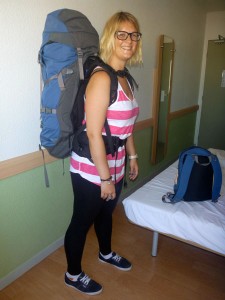 Backpacking around Europe isn’t any straightforward feat, particularly if you are the type of woman who likes to put on make-up, excessive heels, and a cute gown to go sight see! Well ok, overlook the high heels, that’s just not going to occur! After taking a three week backpacking trip to Europe I designed this blog to present you all the advice and suggestions I picked up along the way!

Another in style backpacking destination near Metro Manila is Batangas. This province is known for its pristine beaches and prime-notch resorts which are more affordable than those in Boracay. A must-see attraction in Batangas is the Taal Lake and Volcano, where common excursions can be found for vacationers. Batangas can also be an ideal place for pilgrimage tourism. It’s home to some of the country’s oldest churches such because the Basilica of San Martin de Excursions and the Church of San Juan. By no means depart Batangas with out tasting its famous goto (congee) and lechon (roasted pig).

Breakfast – Chocolate chip pancakes – I premeasured the substances – Pamela’s brand mix, chocolate chips and Merely Egg Whites (instead of fresh eggs) – and transported it in a zip lock. We additionally introduced a small container of oil for frying. The second morning we had Bobs Red Mill hot cereal – we brought a small amount of brown sugar, and a few dried milk powder, so as to add to the recent cereal.

This will be my closing put up about my travels via Europe. I will nonetheless write just a few more catered to folks planning on going to Europe. I have had nearly as a lot enjoyable writing this blog as I’ve on the journey itself and I hope you loved studying it. I like listening to people, who I did not think were reading my weblog, inform me that they have been reading it. So, for anyone wanting to hear more stories – presumably the extra entertaining and better stories – about my journey I am throwing an open invitation out there to go grab a beer or two. Ship me a message on fb, msn, or this weblog. Until…I suppose I can not write ‘subsequent time’ here…cheers!

While paddling, I normally carry three knives. The primary is a small leatherman multitool that stays in my pack for doing repairs, slicing moleskin and for use as a potgrabber. The second is my ESEE Izula neck knife that keep around my neck – that’s my camp chore knife for sharpening sticks and many others. The third is a small mounted blade knife from CRKT that is attached to my PFD. It’s helpful for cutting myself out of fishing line or different tangles in an emergency. As it is stainless, it is also my food prep knife.